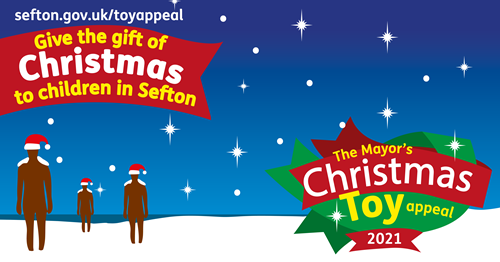 The Mayor's Christmas Toy Appeal 2021 is now over!

The Mayor of Sefton, Cllr Clare Louise Carragher would like to say a huge #SeftonSaysThanks to everyone who contributed to the Mayor's Christmas Toy Appeal 2021.

After another unbelievable year, many families were facing hardship, but thanks to the incredibly generous support of individuals and organisations across the Borough, children did not miss out on the special magic of the festive season.

A total of £180 was raised through online donations so that volunteers could purchase gifts for children of all ages. Thousands of items, ranging from giant teddy bears to junior science kits, were also sent in meaning 548 children and families received gifts to open on Christmas Day.

The Mayor's Christmas Toy Appeal will return for 2022 - watch this space!