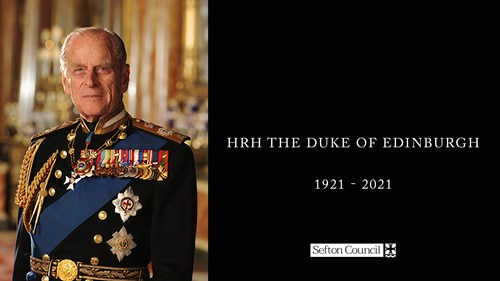 "We can remember the Duke of Edinburgh fondly and look back at the many occasions he visited our wonderful borough with Her Majesty The Queen. From their early visits to Bootle and Crosby in October 1954, to a stop off in Southport and Altcar Training Camp in 1985; I'm sure so many people will remember these visits to Sefton with great fondness and contentment.

"Whilst national restrictions remain in place we would ask Sefton Residents to stay safe by laying floral tributes at home, or in their own gardens during this time.”

An online book of condolence has been set up at royal.uk

Sefton Council is following palace guidance that rather than flowers, the Royal Family would prefer charity donations to one of the Duke of Edinburgh's many patronages.

Liverpool Cathedral’s Evensong service on Sunday 18th April will mark the life of HRH, The Prince Philip, Duke of Edinburgh.

The service, which is invitation only and starts at 3pm, will be attended by community representatives and political and civic leaders from across Liverpool City Region.

The service will be led by Dean of Liverpool the Very Revd Dr Sue Jones with the Lord Lieutenant of Merseyside, Mark Blundell. It will include personal reflections from Dame Lorna Muirhead, who held the role previously. There will be prayers from the Archbishop of Liverpool - the Most Reverend Malcolm McMahon - and the Bishop of Liverpool - the Right Reverend Paul Bayes, along with representatives from other Merseyside faith communities each leading a prayer in their own tradition.

The Cathedral is the fifth largest in the world which means there is ample space for the congregation to be safely accommodated and to observe Covid-19 regulations, such as social distancing and the wearing of face coverings.   Well-wishers are asked not to congregate outside the Cathedral - but to watch the service online – via the Cathedral’s Facebook page and YouTube Channel at https://www.youtube.com/watch?v=NgTSAfIhhA0. The service will also be streamed by local authorities across their channels. Lord Lieutenant, Mark Blundell, said: “The Service of Commemoration is a chance for representatives from communities across Liverpool City Region to come together and remember HRH Prince Philip.

“The Duke was a regular visitor to our area over many years, most recently in 2016 when he accompanied The Queen to the International Festival of Business and the opening of both the new Exhibition Centre and Alder Hey Children’s Hospital. “During his decades of devoted public service, he touched the lives of many thousands of people, whether it was accompanying The Queen on engagements or his active involvement in many charities, organisations and causes close to his heart.

“Like Liverpool, he was tremendously proud of his close association with the Armed Forces. “He leaves an incredible legacy, not just as Consort to Her Majesty, but also his work on the groundbreaking Duke of Edinburgh’s Award scheme which has helped the personal development of so many young people around the country over many decades.”