The Mayor attends many functions during their year in office, both official meetings and social events. On all occasions when the Mayor is present at any function, it is essential that she be accorded the precedence and courtesy due to the office of Mayor, both by custom and by the law of the land. 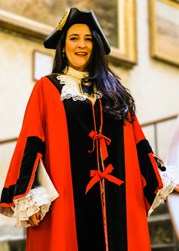 I started life as a professional dancer and had a colourful but short-lived career working in musical theatre as chorus line, performing in much loved musicals such as Grease, Godspell, Chicago and the Rocky Horror show to name but a few, travelling around the country to various theatres. However, after an accident in my early 20s my dancing days were tragically cut short.

After having my two eldest boys in early succession, in my early 20s I had to consider my future options and studied Law whilst my children were growing up. My first Job being with Witness Service at South Sefton Magistrates Court as a volunteer and then after qualifying, working in a criminal legal practice for many years.

During the pandemic, like so many other people, I took redundancy from my employer and now work as a full-time councillor for Sefton Council and a mum to my nine-year-old son.

Whilst serving as a Sefton Councillor I have been a Committee member on  Regeneration and Skills, Licensing, Planning and vice chair of Children’s Safeguarding . I have also been on one outside body committee, Liverpool Law Society Access to Justice .

Since lockdown I have become a keen Gardner and found that this is one of the most soothing and mindful hobbies to do. I have even turned my hand to growing my own food in my very small garden.

We have recently got a puppy who is a terrier and needs a lot of exercise so walking has also become one of my new found passions.

I love to make my own clothes, jewellery and shoes  so watch out for some of my more creative accessories. I simply adore fashion.

I also love crafting, making cards, deco-page, and upcycling anything that can be reused and repurposed.

My husband and my two eldest boys are all musicians’, so it goes without saying that music is a big part of our family’s life. This year I will be celebrating my 25th Wedding anniversary so music will be the centre of the celebration if the restrictions allow. I love all music from heavy metal, country, jazz, indie, pop, classical, folk, but I’m not a big dance music fan.

A list of the previous Mayors of Sefton is available in the download section below. It also includes the past Mayors of Bootle, Crosby and Southport before the Metropolitan Borough of Sefton came into being in 1974.

Expand all
1. How do I invite the Mayor?

It is important that early contact is made with the Mayor's Office to check Mayor's availability. At least two weeks notice is required. Contact the mayor's office for further information.

If the Mayor is able to attend a letter accepting the invitation will be sent with a form, which should be completed and returned to the Mayor's Office at least 10 days before the event (also please note that the time you state on these forms for the Mayor to depart from your event will be strictly adhered to). The form will be accompanied by a copy of the Mayor's CV and guidance notes.

If you would like the Mayor to help celebrate the 100th birthday or Diamond wedding anniversary of a relative or friend please contact the Mayoral Officer in writing (at least 2 weeks before the event). The Mayor's Office will arrange for a card, personally signed by the Mayor, to be sent to the person concerned.

Please be aware that the Mayor's Office reserves the right, but only in extreme circumstances, to cancel the Mayor's attendance at any event.

3. What is the protocol for a Mayor's visit?

Unless the Mayor occupies the Chair at a gathering, he/she should be seated on the immediate right of the Chairman of the function with the Mayoress/Consort on his/her right or on the left of the Chairman. If asked to speak on a toast list, organisers should accord the Mayor the privilege of being the first speaker to propose or respond to the toast, which immediately follows the Loyal Toast.

The Mayor and Mayoress/Consort when they attend a function (or when the Mayoress attends on her own), shall always be seated on the platform or at the top table.

This form should also be used to describe the Mayor in writing, for example, on a seating plan or place card.

However, when in conversation with the Mayor or in the salutation at the commencement of a speech, the term 'Mr. Mayor' or 'Madam Mayor' as appropriate is correct. The Mayoress should always be addressed as 'Mayoress' and the Mayor's consort is addressed as 'Consort'.