A brand new, 1200-seater, first class events space is being planned for Southport.

The Marine Lake Events Centre (a working title suggested by one of the 300-plus schoolchildren who responded to the targeted consultation on the project) will provide Southport with a flexible events space targeted at the mid-sized conferencing market, but with particular emphasis on the e-sports market.

As one of the Southport students said, “making Southport cool”.

Cllr Ian Maher, Leader of Sefton Council, said: “The existing Southport Theatre and Convention Centre has a long and proud history and is an asset that stirs great passion among Sandgrounders, in an incredible location in town, but in need of radical transformation of the building and its offer.

“But the venue closed earlier this year due to the Coronavirus pandemic, so this project would redevelop the site creating a new events complex with state-of-the-art technical facilities, to attract a wide range of different types of entertainment events and audiences to Southport.”

The auditorium will also be suitable for large conferences, supported by a fully flexible and sub-divisible spaces, a 1,500 m2 exhibition space capable of hosting over 3,000 people for major esports events, and designed to continue to accommodate the type of community-led events currently held in the Floral Hall. 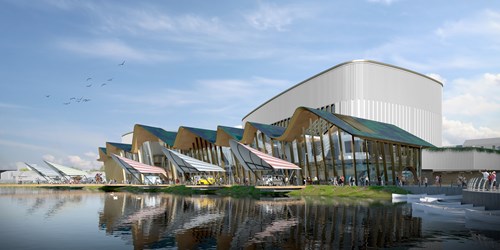 A fully accessible new pier, extending the connections from the Upper Promenade, through the atrium to the Marine Lake, completed by a floor lighting feature at the end, will connect with the spectacular Light Fantastic installation also proposed via the Town Deal.  These two spectacular projects together form a proposition and a destination unique to the UK leisure and conferencing markets, which it is hoped will drive increased visitor numbers, both day and staying.

Creating over 230 new jobs in the town (plus an additional 160 in its construction) the venue will bring a major boost to Southport’s economy, attracting more than 300,000 new visitors to Southport every year, including more than 100,000 from outside the Liverpool City Region.

Cllr Maher continued: “The project is the centrepiece of the Town Deal bid submitted to government on 30th October by the Southport Town Deal board, given the board’s recognition of its importance to the local economy and its prominence in the consultation and engagement feedback.  It will also be a catalyst for wider investment and development, as evidenced by Go Surf’s vision for the Southport Cove project announced last week.

“Feedback on the Town Deal bid is expected in the New Year.”

A world class venue, with sustainability at its heart, the building will be BREEAM Excellent.

Expand all
1. Why is it called “Marine Lake Events Centre”?

This was proposed as a working title by one of the 300+ Southport schoolchildren who responded to an informal survey on this option. A new name for the venue will be determined in due course through further consultation and engagement with residents, and through discussions with potential funding partners.

Consultation with under 18’s also resulted in a strong preference for a flexible entertainment space that can hold E-sports events. The Town Deal board shared an overview of this proposal with Southport’s schools and colleges, and of more than 340 students, all aged 7-18, who responded to our short survey on the project, 78% gave the design and idea a score of 8 out of 10 or higher. The qualitative feedback also included huge emphasis on gaming and e-sports, accessibility for all ages, and suggested the working title of Marine Lake Events Centre.

Further consultation and engagement will be progressed across the town as the project develops further.

3. Why not just reopen? Why this proposed new build project?

Sefton Council commissioned a sector-leading team in IPW and HOK early in 2020 to evaluate options and provide recommendations on the venue and its future, following closure.

The building has longstanding structural, mechanical and electrical issues which pre-date this year’s closure by some time. Moreover, the venue has experienced significant deterioration in revenues and in economic benefit to the town over the last decade.

It is clear to the subject matter experts, to the council and to the Town Deal board, that a new building with a new proposition for customers is required.

The design report and outline business case developed both demonstrate that “make do and mend” will require continued investment over a prolonged period, and will not enable transformation of the offer to meet market demand.

4. What are you doing about the history and heritage of the building?

The pride and passion for the former STCC is shared by all residents, and as the design develops further it will ensure that the venue continues to recognise the history and heritage of the building and of the people of Southport.

Proposals for further development include restoration and incorporation of the Floral Hall glass dome into the new design; the design of the atrium to reflect the structure of Southport Pier; and a proposed memory wall to capture the stories of the venue and of our residents.

Feedback on the Town Deal bid is expected in the New Year, but Sefton Council’s Cabinet processes will continue in respect of review and approval of options for the short- and long-term.

Further review and design development will include evaluation of options for construction sequencing to enable parts of the venue to remain open and operational throughout the build period. This includes continued review of options and opportunities for reopening in 2021, in advance of the new project, when it is safe and viable to do so