On 30th October 2020, the Southport Town Deal Board submitted an ambitious £50 million plan to the government to transform the fortunes of the popular coastal town, which include a new waterside events centre, all weather visitor attractions, new business incubators and a spectacular light show in the Marine Lake. 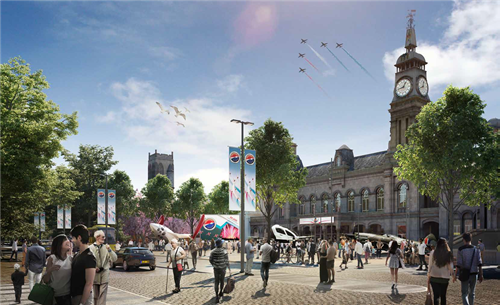 The funding will kickstart a wider £400 million investment in the town and bring 1,250 additional jobs to the area as a result of the initial projects.

The bid is part of the government’s Town Deals Fund, developed to ‘level up’ and drive the economic regeneration of towns across England.

A host of Southport residents and businesses came together to mark the launch of the Southport Town Deal in a special video.

Produced by Sefton Council, the video stars a host of 'Sandgrounders' spanning a number of generations to welcome the bid.

The Southport Town Deal bid includes a new convention and events centre on the site of the Southport Theatre and Convention Centre, which closed earlier this year as a result of the coronavirus pandemic. The space would house a 1,200-seat auditorium, exhibition halls as well as a cafe and co-working space. This state-of-the-art facility has been designed for flexible use and targeted at attracting new types of events such as e-sports to the North West region.

The plan also aims to regenerate the town centre and drive business growth. Lord Street, the town’s grand boulevard that inspired the Champs Elysees, would be restored to its former glory and a new events space created. A business incubator is proposed in one of Southport’s former shopping arcades providing much needed space for the town’s digital and creative businesses. A larger Enterprise Store would also be developed in a former department store building to provide scale-up accommodation for growing businesses.

An immersive water, light and sound show experience is proposed on the Marine Lake. Meanwhile the existing Southport Pleasureland would also be transformed, partnering with a globally recognised brand to create a themed indoor attraction open to visitors all year round.

Rob Fletcher, Chair of the Town Board commented: “Our plan has been informed by the biggest conversation that the town has ever had about its future. We’ve had 7,000 pieces of individual feedback from residents, business and visitors. 700 school children from the town have also put their ideas forward. Our plan is designed to provide opportunities for our current residents and future generations.”

Dwayne Johnson, Chief Executive at Sefton Council, said: “The Town Deal process has raised the profile of Southport with investors and we can already see the positive effect it is having. For example, Sefton Council has just announced an exclusivity agreement with GoSurf to create The Southport Cove Resort. This £40m privately financed investment will bring a unique surf wave pool and wellness and spa facilities to the heart of the town. The resort will add value to our Town Deal plan and complement our proposed projects, such as the convention and events centre and Marine Lake experience.”

Planning and development consultancy, Turley has supported the Town Deal Board through the process. Richard Laming, Senior Director at Turley, said: “This plan signals a clear intent to the government and other investors that Southport has a clear vision for the future. The projects are unique and investable, and have the ability to leverage significant regeneration benefits to accelerate the region’s recovery from Covid-19.”

A decision on the funding is expected early 2021 and further details of projects will be released in the next few weeks.